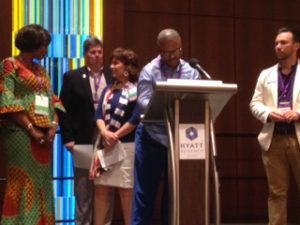 If anyone desires to come after Me, let him deny himself, and take up his cross, and follow Me said the Lord.

This is a powerful statement of our Lord, for all of us who want to follow him. I am pleased to see how everyone today want to be a follower of Christ in one way or the other. Most of the time following Jesus is not a problem but denying ourselves is the greatest challenge we as believers of the gospel has in this generation.

Jesus has finally come to the point where he is willing to ask us as believers to make a commitment.

If anyone, man or woman, wants to follow Jesus, to be a Christian then he must do two things. He must deny himself and take up his cross. When Luke tells this same story, he clarifies that we are to take up our cross daily (Luke 9:23).

To deny yourself means to say No to yourself and Yes to God. To say it differently, the process of denial is to humbly submit my will to God. It is to go through life repeating the words that Jesus said the night before he died. When he was praying in the garden, he said to God his Father, Not my will but yours be done.

What does it mean to daily take up your cross? The cross was a horrid symbol of pain, shame, and death. Every day we are to live in such a way that it is apparent to everyone that we have died to ourselves, to our selfish ways and ambitions, and live for God.

Our commitment, collaboration or partnership with Cooperative Baptist Fellowship (CBF), remind us about this greatest recommendation from our Lord. Ready to deny ourselves and say yes to God will and purpose for our calling.
When looking on our starting point of the partnership with CBF, which have opened a new page in the history of Shiloh Restoration Church and taken the church to its next level, we understand that it a wonderful and amazing collaboration. Just after the commissioning service, we understood that it not all about starting well, but finishing well must be our greatest assignment.

There nothing wrong in starting well, and the most important thing is to carry our cross and to finish well. This is the most crucial point where our Lord Jesus Christ can stand and call us faithful servants.

To better understand that, the bible is full of stories, of so many people who started well and couldn’t finish well because they abandoned God ways and wanted much more to listen to what people says, to gain people approbation, selfishness…

We found this in the life of King Saul; Saul started out very well, he was God chosen one to lead the scattered nation of Israel. He went on to lead the nation through several more military victories as his popularity reached its zenith. However, a series of very serious blunders, beginning with an unauthorized sacrificial offering (1 Samuel 13:9-12), started Saul downfall from his kingship. Saul downward spiral continued as he failed to eliminate all the Amalekites and their livestock as commanded by God (1 Samuel 15:3). Disregarding a direct order from God, he decided to spare the life of King Agag along with some of the choice livestock. He tried to cover up his transgression by lying to Samuel and lying to God. This disobedience was the last straw, as God would withdraw His Spirit from Saul. The break between God and Saul is arguably one of the saddest occurrences in Scripture. While Saul would be allowed to serve out the rest of his life as king, he was plagued by an evil spirit that tormented him and brought about waves of madness. Saul final years were profoundly tragic as he endured periods of deep manic depression.

In one final act of disobedience Saul takes his own life by falling on his sword, thus ending a promising life on a final note of shame. There are three lessons we can learn from the life of King Saul. First, obey the Lord and seek to do His will. From the very start of his reign, Saul had the perfect opportunity to be the benchmark by which all future kings could be measured. All he had to do was to seek the Lord wholeheartedly, obey His commandments and align his will with that of God, and his rule would have been a God-honoring one. However, like so many others, Saul chose a different path and strayed away from God. We find a perfect example of his disobedience in the incident where God commanded him to kill all the Amalekites, but Saul kept the king and some of the spoils of war. Saul compounded his troubles by lying to Samuel over the incident. He claimed that it was the people that saved all the animals (1 Samuel 15). This act, plus many others over the course of his rule, emphasized the fact that he could not be trusted to be an instrument of God will. The second lesson we learn is not to misuse the power given to us. There is no question that King Saul abused the power God had entrusted to him. Pride often creeps into our hearts when people are serving and honoring us. In time, receiving star treatment can make us believe that we really are something special and worthy of praise. When this happens, we forget that God is the one who is really in control and that He alone rules over all. God may have chosen Saul because he was humble, but over time that humility was replaced by a self-serving and destructive pride that destroyed his rule. Another lesson for us is to lead the way God wants us to lead.

We all have taken the right decision to partner with CBF, do God business with purpose to help the work of the Kingdom to move forward, we believe that we started well. We need to really deny ourselves, carry our cross and move on. Let not be like King Saul. God will help us to fulfil this assignment in Jesus name.